Once, I presented one of my favourite creations at Nettuno restaurant along the sea front of Rapallo. This recipe is very much appreciated by the most refined costumers; it is classy and fully reflects my style. I decided to use Salmon roe to strengthen my relationship with fish recipes, which I most enjoy cooking.

This recipe, in particular, is for the waiting service that is those customers keen on tasting a little bit of everything and sharing pizzas in the centre of the table. In order to welcome people, pizzas will be, clearly, served first. It is important to add no other similar ingredients but rather strictly abide by the ingredients listed below. Make sure you don’t forget it!

This recipe has to be enjoyed for its fresh and strong flavour therefore ingredients won’t be cooked with the pizza. Cooking the burrata is not a good idea, believe me!

First, let’s start by preparing the ingredients: clean the borages by taking off the corolla from its sepal.

If the burrata is kept in the fridge, make sure it goes back at room temperature. I personally prefer to buy fresh-made burrata instead of keeping it in the fridge. Although, I understand it is not possible everywhere.

Once the salmon roes’ jar has been open, I suggest to put some water in the jar itself as very often roes are sticky and salty. Water contributes to make roes easily detachable from one another and less sapid.

Cook the pizza’s base only with very little EVO oil. In this case, I would cook the pizza in a minimum temperature to make the base well dried. The aim is to obtain a very crispy base to contrast as well as support the soft burrata. Once the pizza has been taken out of the oven, the first step is to break the burrata by hand and place it on each pizza slice. Now, we need to be careful to position the salmon roes as they have a very tasty and strong flavour. There must be a small number of salmon roes to maintain the equilibrium with the other flavours. This is a very important step.

After focusing on the main taste, it is now time to include the tinges. The ingredients chosen for this recipe are lemon zest, black pepper and borages. Despite what other people think, flowers are not only decorations but also a very important step in the recipe. They produce delicate scents such as distant cucumber fragrances, which perfectly mix with the other ingredients. 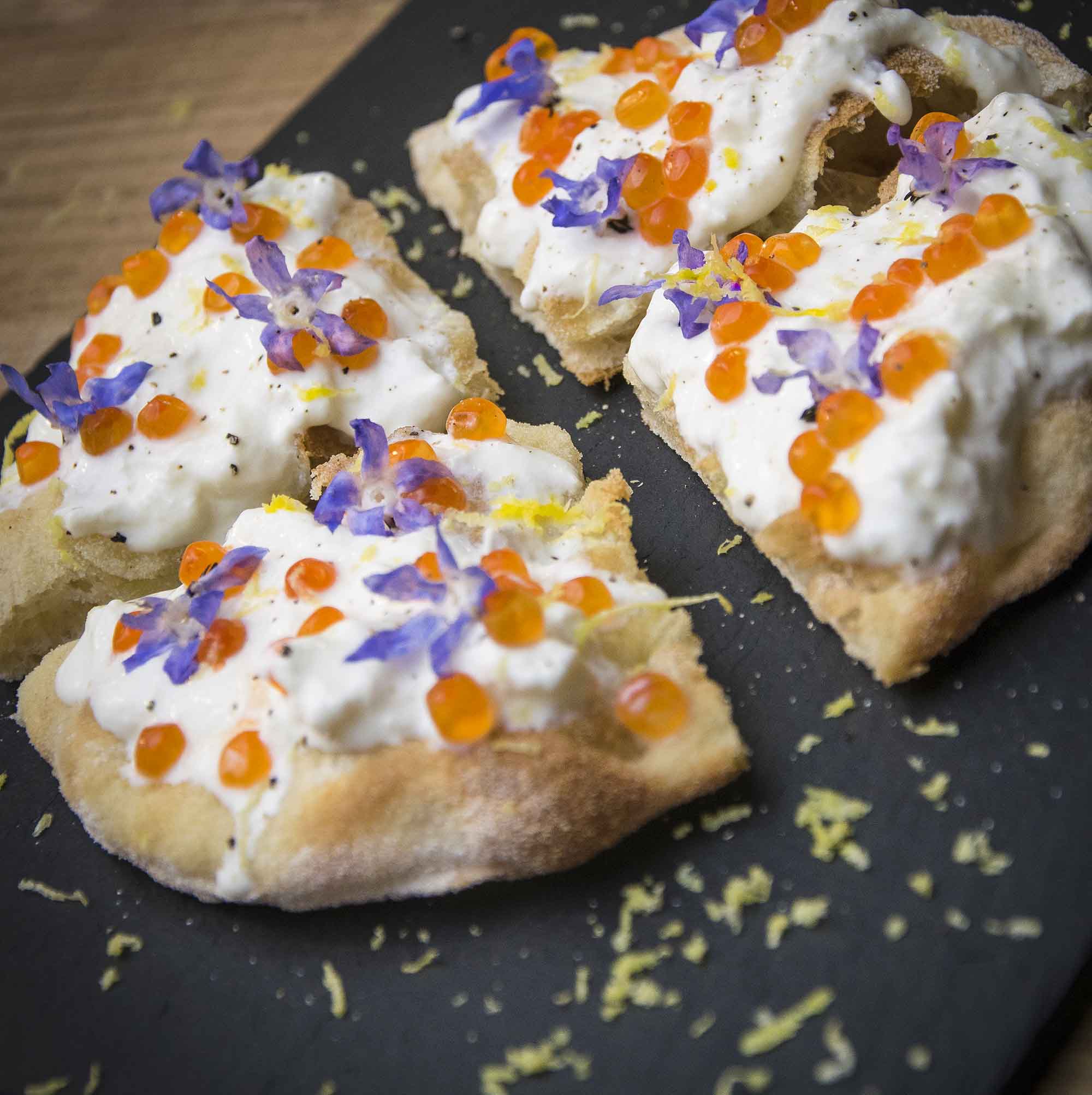